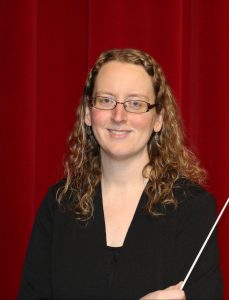 A member of NAfME and MMEA, she serves on the Maryland Orchestra Directors Association’s Board of Directors, the MMEA Young Composers Project committee, has presented and participated on panels at MMEA conferences, and presented at the MCPS New Educator Orientation.  Her MBHS Chamber Orchestra performed at the NAfME Eastern Division Conference in Pittsburgh, PA in April 2019 after being selected from more than 170 entries.  February 2019 marked the fourth appearance of Ms. Roberts’ MBHS Chamber Orchestra in the past seven years at Maryland Music Educators Association conferences.  In previous performances the Chamber Orchestra served as a demonstration group for a major music publisher and an American composer, and performed works written by two Montgomery Blair students recognized by the MMEA Young Composers Project.

With Ms. Roberts as its Tri-M Music Honor Society advisor, MBHS received the third place award for Chapter of the Year in 2013-2014.  She has served as a mentor teacher for college interns, and she is also a frequent adjudicator.  Ms. Roberts has been a member of the Market Street Big Band since 2013.

Ms. Roberts was awarded a grant from the Wolf Trap Foundation for the Performing Arts that she used to commission a work by renowned British composer Paul Lewis.  After a week in residency, the MBHS advanced orchestra performed the world premiere of Salute the Silents! at the historic AFI Theatre in Silver Spring.

Volunteers are a huge part of PVYO!  We would love to have your help this season.  Inquire here.